In versions before Exchange 2010 it was possible to find the free space within the Exchange databases by searching for event id 1221 in the event log.

But in Exchange that is gone – instead you can use this Powershell command:

Microsoft has released these January 2011 updates for Lync 2010 Phone Edition:

Fixes in this package:
2483236 Strings or sections in dialog boxes are cut off in Lync Server 2010 Topology Builder

Fixes in this package:
2470417 A Lync 2010 user cannot share his desktop or share an application during a Lync online meeting that contains an OCS 2007 R2 user and a Lync 2010 user

Fixes in this package:
2468523 The meeting details tool tip is not localized when you join a meeting by using Lync Web App
2475336 The text on the “IM”, “Phone” and “Share” buttons are cut off in Lync 2010 Web App
2495788 You cannot join an Audio/Video conference and you hear a fast busy tone when you try to join the conference by using Lync 2010

Fixes in these packages:
2464810 A credential dialog box appears or an error message is received when you log on to Lync Online
2464811 The icon of the speakerphone in Lync 2010 is not generic
2464817 You have to press the TAB key two times to select the “Save my password” check box after you type your password in the Lync 2010 logon screen
2464828 The “Learn More” link does not indicate as a selection when you press the TAB key to select it in the “Edit Location” dialog box in Lync 2010
2464840 You are directed to the MSN website when you try to download software that is required to log on to Lync online by using Lync 2010
2464841 Lync 2010 does not populate your location information automatically
2464842 “Cannot sign in to Lync because this sign-in address was not found” error message during the Lync 2010 logon process when the default user is Lync-disabled
2464845 A Silverlight application for Lync 2010 does not start from a URL address that does not contain the page name
2464850 The conference disclaimer is missing from the “Disclaimer” window when you try to join a Lync 2010 conference by using an Office Communicator Object Model
2464872 Certain text in an invitation email message for an online meeting are displayed incorrectly when you create the invitation email message by using a Hindi or a Kazakh version of Lync 2010
2464873 Your audio and video is enabled automatically when you click “Retry” to rejoin a Lync 2010 Audio/Video conference
2464874 A Lync Online disabled user is not handled correctly during the logon process in Lync 2010
2483227 Your Live Meeting Service presenter password is included in the INVITE message when you start a meeting by using Live Meeting Service in Lync 2010

Microsoft planning and deployment guides can be viewed and downloaded here.

Protected: Howto: Get a Lync mobile client for Iphone

Published 19/01/2011 | By Joachim Dissing
There is no excerpt because this is a protected post.

After you have upgraded your Exchange installation to Exchange 2010 and you might want to use the new distribution group features, you will see this “error”:

“You don’t have sufficient permissions. This operation can only be performed by a manager of the group” 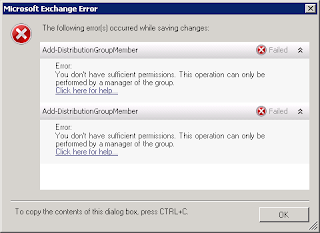 You might also notice that it’s quite difficult to add a manager to the group from the Exchange management console.

The reason for this is that the group needs to be upgraded to Exchange 2010.
You can do that with the below command, which will upgrade all the distribution groups you have.